I wrote a post a couple weeks ago about a giveaway held by Shantock Bears.

Today the mailwoman brought the mail up to the house and asked me to sign for delivery of a box.

After unwrapping it this is what popped out 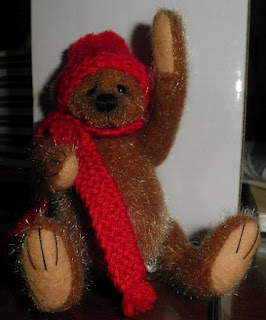 His name is Little Shantock.  I gave him a tour of his new home. 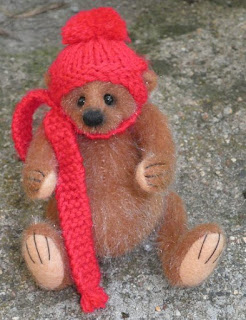 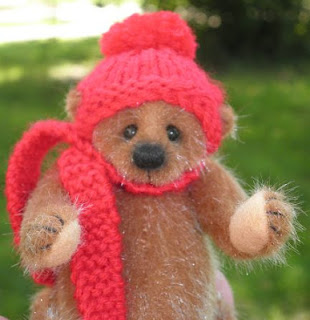 We took a walk around outside.  He told me that when I learned he was going to live in North Dakota he thought he would need his stocking cap and scarf because he was sure it would be cold.  Well it was 80 degrees F today which is 26 C.  And then I told him that tomorrow was forecast to be 90F which he told me is 32C.  He decided that it was a little too warm for his custom knit outfit. 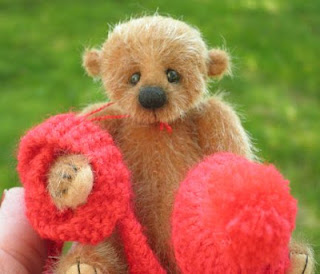 So he took them off and they have been packed away until winter when he will be needing them.

He felt a bit under dressed and noticed a small tatted flower and asked if he could wear it as he thought it might look similar to an cravat. 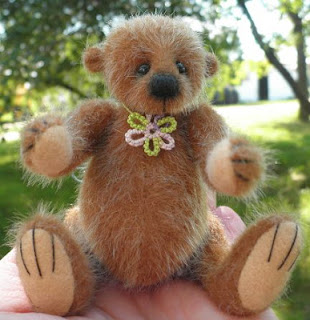 It looks very nice.  We continued our walk around the yard and decided to take another picture, this time with my Tatting Mug from Sherry Pence ~ LadyShuttleMaker she still has 1 left in her Etsy Shop. 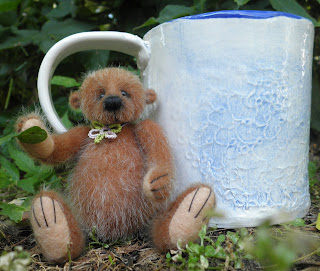 Shantock asked me about the tatting motif on the mug and I showed him one of the projects I am working on right now. 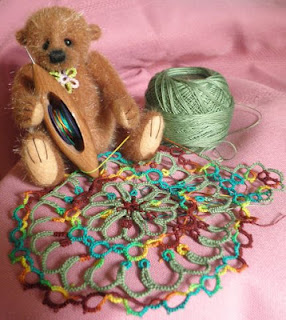 It is Linda Davies Star Attraction Doily.  She has the pattern available on her blog.  He thought it might be fun to learn, but the shuttle is almost as big as he is.
Shantock wanted to know if I was going to tat the rest of the day and I told him that I was going to be making beet pickles and he said he would help.  I had to explain to him that beets would stain his fur and I didn't think would be a good idea.  He decided to supervise instead.

While we were talking we decided that he really needed a better tie.  He thought that since this is the west, and he is now living on a farm with cows, that he would like a "western" tie.  So he now has a "string" tie with turquoise beads for the string end caps and a turquoise slider under his chin. 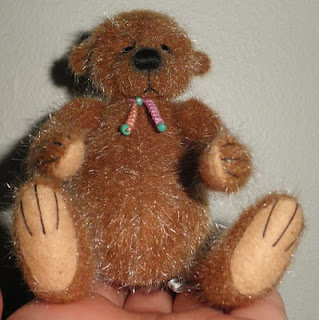 as you can see from the picture above, he seems a bit sleepy.  It has been a long busy day for a little bear and he is ready for bed.
And so am I

Email ThisBlogThis!Share to TwitterShare to FacebookShare to Pinterest
Labels: bear

This is for Fox, and any one else who wanted to see how I tat.
This is very rough, but I do not have any editing software.
So ignore the first and last 10 sec or so.
Also, don't listen to the audio, there is just background noises.

Double Stitch for Tatted Lace from Jeanne Lugert on Vimeo.


let me know what I can do to make these better.

It has been suggested that I post a video of my tatting technique.
My digital camera takes decent videos, and stores them in MP4 format.
I do not have any software in my computer to watch them, or edit them.
If anyone has any suggestions as to software that will work in an older computer using XP Home as an operating system I would appreciate the information.

There are 2 versions available, Catholic or Evangelical
Take a few minutes and watch

Email ThisBlogThis!Share to TwitterShare to FacebookShare to Pinterest
Labels: Catholic

I commented on a post at Shantock Bears when she was holding a giveaway.

I have been adding more bear sites as I run across them.  I love the little tykes.

Email ThisBlogThis!Share to TwitterShare to FacebookShare to Pinterest
Labels: bear

A couple of weeks ago, Isdihara  over at Ambitatterous  posted a request from Georgia Seitz for some tatting to applique on the Scholarship quilt for the Palmetto Tat Days.  Here is Isdihara's post with the particulars

I decided that even if I can't go, I can contribute, so I decided to tat a string of Josephine knots
::The Josephine rings should be tatted in size 30 to 40 -- about 8-10 half stitches in each, tatted in a string of rings with little to no space between them to use for greenery and leaves.::

So I wound a bobbin for my pretty LaCossette shuttle and started.  I didn't measure the thread I wound, so measured the thread when I wound a second bobbin no tonight.  I was able to put 9 yards of size 40 Olympus thread on the bobbin, and from that I will get a string of  200 Josephine Knots that is only 2' long.

Wow, that is a lot of thread in a little space. 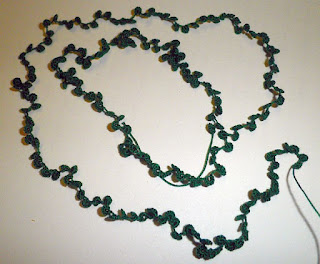 I tried the JK both ways, using the 1st half DS or using the 2nd half DS.
I learned a couple things,
1. it is easier to close a JK made with the 2nd half DS
2. be sure the let your shuttle hang and unwind every couple of JK.

I will see if I can get a second string done in the rest of this week, and get them sent off to Georgia.

Oh yes, I would love to go to the Palmetto Tat Days, the sign up is open, so be sure to stop by at the link above.  But, I will be spending 4 days over the Labor Day weekend demonstration Tatting at the Western Minnesota Steam Threshers Reunion in Rollag MN.  It would be just to much contemplate more days off work to go to Tat days,  and well, farmguy might not be too happy,  it will be soybean harvest right about then too.

Any one in the area who would like to see some wonderful older steam powered, or horse powered farm machinery please stop by.  There are all kinds of demonstrations, including an old general store, and the ladies pavilion where you will see not only tatting, but bobbin lace, spinning, weaving, quilting, dying and many other crafts.
Posted by Ladytats at 11:03 PM 2 comments: