Today was a busy day.  Another First Responder and I went to a day long seminar about Trauma in a town about an hour away.  we had to be there at 7:30 in the morning. and weren't scheduled to get out until after 4:00 pm.  we did get out early which was good.

when we got back to town, I stopped by the Fire Dept to see the new to us equipment/rescue truck that we had just gotten.  yeah,  a much more reliable engine, and a better arranged space then we had in the former bread delivery van we had been using.

I did get to do some tatting tonight so will post that and mention that I would have gotten some more done on the reticule, but tried to tat while watching the Hallmark movie tonight staring Betty White.  It is very difficult to tat while crying your eyes out. 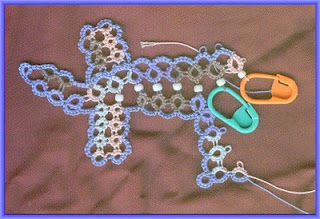 I still have no clue what this is that Jane has us tatting.
Anyone can join at any time, so if you are interested in tatting a mystery motif, please go here and give it a go.

it has been a very cold day today, the high didn't get above 0F and this evening it started to snow along with the wind blowing.  It may be a very icky commute to work in the morning.

I hope all tatters wills stay safe, dry and warm.
Posted by Ladytats at 10:36 PM 4 comments:

I have been asked a couple questions, so thought I would answer here.
one thing that I really like about this ebook, is that it is not hard on my eyes.  I spend 90% of every day at work looking at a computer and didn't want to do that all evening too.  The Kindle isn't back lit so you do need to have light in the room to read, but it isn't hard on my eyes.

I am having fun looking for free books, and there are a lot, because I am reading books that I wouldn't ordinarily read if I had to pay for them.  Granted, that option would be available at a library, and I am not knocking libraries, but the closest one is 30+ miles away and I only get there once or twice a month if that.

there are also a lot of books that are available for a small fee too. often cheaper then the paper ones.

It is light, even with the cover/case so there are no heavy books to drop on your face if you fall asleep (been there, done that).

tatting for the cover is in the investigation phase so will have to wait to see what I come up with as there are lots of designs floating around in my brain.  I don't know if Jane's Brain Cell #3 will need to come for a visit or not, we will see.
Posted by Ladytats at 12:15 PM 6 comments:

Email ThisBlogThis!Share to TwitterShare to FacebookShare to Pinterest
Labels: kindle

My wonderful children gave me a Kindle for Christmas.  Which is really cool, because it is the "New Generation" version and can handle PDF files as well as the .azw files.

I did buy a hard cover for it,  plain black, and of course what do you do with a plain black cover,  why cover it with tatting of course.

so, I was looking at table mat patterns, or tatted ground patterns, or old edging patterns, and hadn't really made up my mind, but I just got back from visiting Fox's blog and she had tatted one of the patterns I was seriously looking at.  and in color which of course I would use.

I have some  wonderful HDT, that has been waiting for a project, so I am going to use some of that as well.  seems decadent to use that wonderful thread just for me, and to do some tatting just for me.

so, if anyone has a favorite pattern, or thoughts on a tatted Kindle cover, please leave a comment.
thanks in advance.

I'm using farmguy's computer, and the scanner is hooked up to my computer, so no pictures of anything tonight.

I did get day 6 of my TIAS done this evening and have 1 and a half rows of the top rows for the drawstring to do on the reticule.  Then to use my Lacet to make the drawstrings.  and a lining, but things are starting to look like they will be done soon.
Posted by Ladytats at 11:31 PM 6 comments:

I have finished all the end of year tax forms for 4 companies.

maybe no more overtime for a while

I have been commissioned to tat a large Christmas tree,  about 12" tall. for the director of a area assisted living home.  He showed me one that had been done by someone years ago, but done with ecru baby weight yarn and you could very easily see the cut and ties on every row.  The pattern for that tree was simple rings and chains in rows.  like this  which will likely end up being the pattern that I use, as it is easy to work either bottom up, or top down, and most likely I would work it top down, so I could expand the rows to get the height. 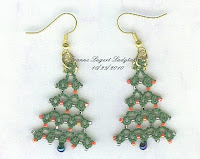 he wants  to frame it for hanging on his wall.


I have been hunting tree patterns to get ideas and one of the trees I found was on Icela's blog  Does anyone know where I can find the pattern for this tree by Maus? 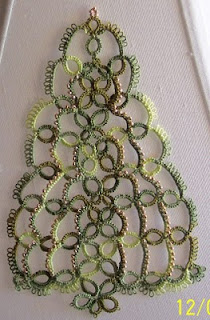 
He also was wondering if I would teach classes to the residents.
I haven't figured out what I would charge for classes yet.  when I taught before, I was paid by the college, and they paid me the going rate for an adjunct professor.
I would have to do it outside of work hours, so likely on weekends as evenings would be too late, and it is 15 miles to the home.  I would like to make a bit, at least gas money and a bit for my time, but don't want to charge too much for people on fixed incomes.
I would put together a kit for beginners,  so that would have to be figured into the price.
do I sound mercenary?  any and all ideas would be appreciated.
thanks
Posted by Ladytats at 11:23 PM 3 comments:


I didn't realize that it had been so long since I posted any tatting.

I have been tatting, but didn't want to post some things before they had been received by the person I was giving it too.

So,  while I don't have pictures of all that I have done,  here is some of my tatting. 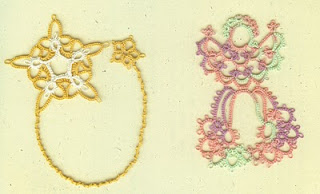 I made these for a friend of mine with a birthday in December.  The threads were some I had laying around, so no labels.
unfortunately, I have lost my notes, so am not sure of the patterns,  the angel is one of Martha Ess'. 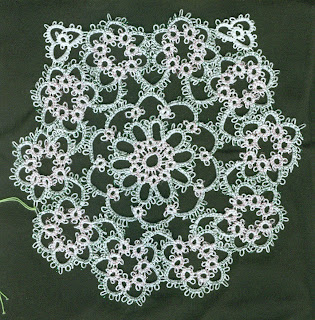 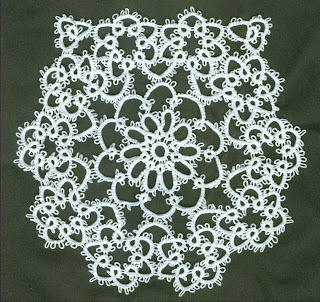 Here is a project that I have been working on fort quite a while.  I started it late last summer.  This is the front of a reticule.  I is tatted in size 10 White Lizbeth with both pink and green blending filaments added.

Here is the back of this reticule.
I have the joining round and the beading round at the top. and I think I am going to use my Lucet to make the drawstring.    I am finally seeing the end of the tunnel with this,  it has taken me much longer then I thought it would.

The pattern is from Old Time Crochet magazine August 1992.

here is the definition of reticule from Dictionary.com
–noun

a small purse or bag, originally of network but later of silk, rayon, etc. 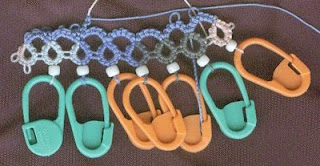 This is Day 1 & 2 of Jane's TIAS.   If you don't know what  a TIAS is, it stands for .....
Tat
It
And
See
Jane releases only a small part of the pattern every day or so, and doesn't tell us what the final result will look like,  you are "tatting blind".
you can join at any time, and catch up as you go or just to see our progress go to the  TIAS blog 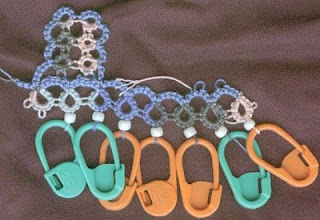 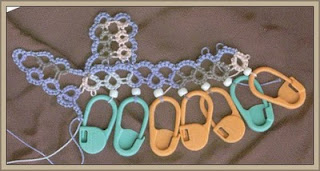 and Here is Day 4.  I have no guesses, I will have to wait and see what the next steps are.  I have participated before, and sometimes have been able to figure it out early on, but not yet this time.