Melissa over at Green Girl in Wisconson,  is an amazing writer. I recommend taking a few minutes and reading her post about the Reason for the Season .


I have a bit of tatting that I can show you, and some cute crocheted earrings that I received from a dear friend of mine.

The pattern is by Elizabeth Zipay, and I posted about it several weeks back, I changed the thread that I used, this is Cebelia size 30 and the small beads are Mill Hill antique Glass Beads and the larger center pearl is a 4mm glass pearl from eebeads.com 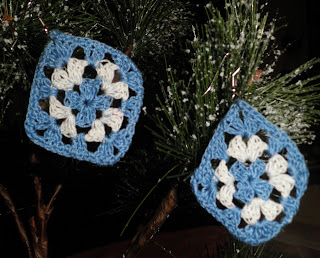 aren't these earrings darling?  a very dear friend of mine sent me these.  they are so cute, as soon as I received them (at work),  I had to change the ones I was wearing  to wear these.

the final picture shows both pairs on a small Christmas tree that I picked up for displaying tatting items. 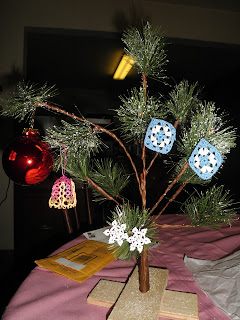 when I was down in South Carolina last month, I saw some Charlie Brown Christmas trees offered for sale at $25.00 each.  way too much for my pocketbook.  but I got to thinking, and did a search online the saturday after Thanksgiving, and found an online store offering Charlie Brown Christmas trees on sale for $9.99 normally $15.00 and with free shipping, so I got 2, one for my office at work, and one to use for displaying tatting at various venues.

so you will occasionally be seeing this tree as I won't put it away for only Christmas.

Have a great time with what ever Holiday you celebrate.
Posted by Ladytats at 12:41 PM 4 comments:

I have been doing some tatting I can share with you.
These Rosaries are headed to Kansas City.

They are both tatted using Lizabeth threads in size 20 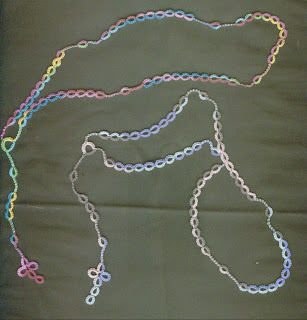 The upper one is done in Ocean Sunset and the lower right in Denim Whisper.

I usually can tat a rosary in 2 hours, with no problems.
I was able to tat the blue one from start to finish with no trouble, only had to put it down to do other things once, but the Ocean Sunset,  I had more trouble with.  I don't know what it was, but I had to cut out 2 sections at different times and re-attach the thread to continue it also took me several days to get it finished as I only had time for tatting in the evenings.

the rest of my tatting can't be shown yet, but you will see it in due time.
Merry Christmas everyone.
and a Blessed New Year with lots of time for tatting.

Look what the mailwoman brought

the mailman came to my door today which meant lucky me, I didn't have to walk a 1/4 mile to the mailbox in this chilly windy weather.

Yeah! but she brought me a package from the U.K. oh boy, was I excited.
remember this post from Sally at Tat's Heaven?   The black walnut is from my parents back yard. there are several huge black walnut trees in their yard.  they had some branches that had needed to be trimmed a few years back, and they were well seasoned.  Sally husband "I'm in the garage" does wood work and so I sent him some, as American Black Walnut is not native to the UK

here is a look at what was in the package 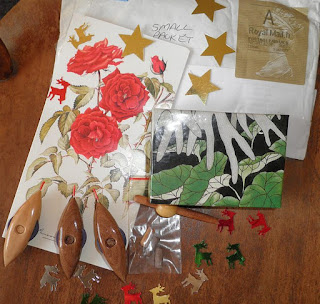 look at the pretty box.  it is a present all by itself.  the stars and reindeer confetti fit the season and then there were 3 shuttles in the box.  When Sally asked for my address, I was thinking 1 shuttle, but 3.  Wow.  Christmas came early this year.

the 2 darker shuttles are the Black Walnut and the lighter color one is Apple wood from Sally's father's garden.  Thank you Sally and give my thanks to "I'm in the garage" too. These will be cherished.

would you like to see a close up of the shuttles? 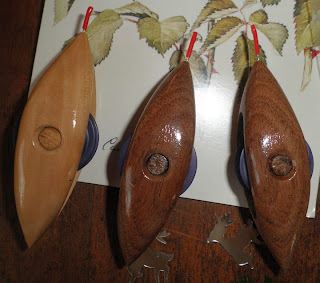 Here in the SE corner of North Dakota for the past 10 - 15 years a group of 40+ men and women of mostly middle age get together each year starting in the end of Sept/beginning of October and practice a Christmas Cantata.  The folks come from an area about 70 miles from end to end.  We practice each monday at a location in about the middle. then perform 4 times.  Tonight was our 3rd performance, and tomorrow will be the last for this year.

this years Cantata is  Night of the Father's Love by Pepper Choplin.   we also sing several well known Chrismas Carols with the audience's participation and always end with Handel's Hallelujah Chorus.   our accompaniment is a single piano played by an amazing pianist who in the daytime is the local physicians assistant.  The Director is the manager for the local senior living center.
The local handbell choir performs before us and also accompanies us and the audience during the Christmas carol sing along parts.
Posted by Ladytats at 10:43 PM 3 comments:

tatting from the trip and what dragon species is this?

Well, I had a lot of wonderful lazy time, sitting in the sun, and tatting.
I got some of my Christmas presents finished,  and here is a sneak peak. but a peak is all you get 'cuz some of the recipients read this blog on occasion

but, since I only took 9 wound bobbins, and not whole balls of thread, I ran out.
Oh the horror!!

and these are the result of that excursion

The dragon taxed my tatting abilities a bit as I hadn't done all that many SSSRs, so I am not completely pleased with the tail but not bad, and I got better with the practice.  I have trouble when closing the SSSR of pulling the loop thread so tight that a space opens up between that SSSR and the one previous to it. I did figure out one trick,  when you have finished the first half of the SSSR, and lay the shuttle over your hand to pull the loop out to tat the 2nd half,  put the shuttle through the SSSR and then over your hand, that way, the shuttle thread come out on the back of your SSSR.  for me that made it easier to get the next ring snugged down very close.  I figured that out about 5 rings in, you can see the rest of the SSSRs are closer together then the ones at the beginning of the tail.
I also decided that I wanted the wings to look a certain way, white gossamer membranes between gold "bones".  The pattern calls for split rings, well, I didn't want half and half split rings, so I needed to use a SSSR and had to stack my shuttles to tat the first half of the SSSR so I could carry the white in the core.

I am rather proud of how it turned out.  I was able to see a vision of what I wanted and was able to make it work.

now of course, he/she needs a name and a classification,  it is not a Midnight Dragon, or a Midday Dragon, or a Snow, or a Water, or a Berry or a Green Leaf.  Does anyone recognize this species?

one name that has been proposed is Humphrey,  does this look like a Humphrey?

All suggestions will be seriously  considered.