Blessed Easter every one

I was able to complete several tatting goals today.

First, I have completed round 8 of the teal doily that I showed a peek of last week. 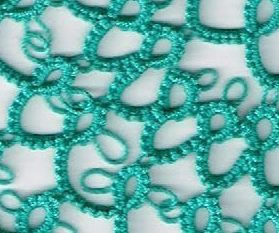 he he,  same peek.
There are a total of 14 rounds to this doily. right now it is about 8" in diameter.

The other 2 goals I set for myself was to practice my cluny leaves so I wouldn't forget how, and to lean Interlocking Rings

Here is my Cluny Practice. 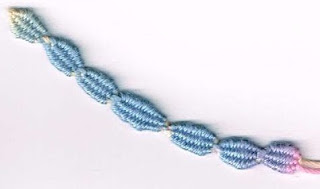 They turned out pretty good.  I wish I had made a note of a tip I ran across on the net, it makes it really easy to get the thread loom right which makes it much easier to do the weave.   You start by wrapping the thread around your hand just as you would a ring.  Then set your shuttle down to the back of your hand.  Don't hold the pinch too tight, and grab the thread between your ring finger and your pinky and pull that down around your thumb and catch it in the pinch. Then take the shuttle from behind your hand and run the thread between your pointer finger and your middle finger,  wrap it several times around your pinky to hold it in place.  Then use shuttle 2 to do the weaves.

The Interlocking rings turned out really well I think.  I had to tat the last ring twice to get it right, but this is home it turned out. 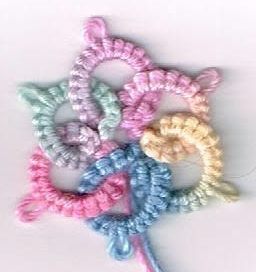 I was pretty pleased, but I do have to give credit where credit is due.  I watched Karen Cabrera's video and printed Jon Yosuf's tips and tricks on tatting the last ring.

We are having another Sunday night into Monday blizzard. Will have to wait until morning for sure, but as of right now, it will be another day when I won't get to work.  Oh well, snow days are tatting days.

I haven't been very vocal on my blog lately,  but I have been doing some tatting and I have some things to show to you.

First up, Fox was so kind and asked me to test her Elizabeth motif.

I didn't have bugle beads, and will need to get some at some point so I have them available.  I instead stacked several seed beads to mimic the Bugle beads, but I did not estimate correctly.  I used 3 beads, when I should have used 4. 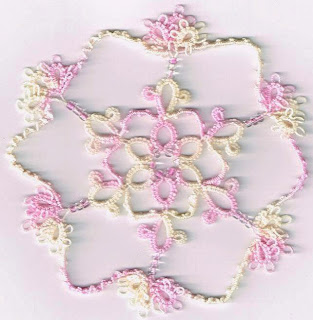 I tatted the 10 sets of Victorian Sets hoping for a straight sided motif, but because I didn't have the beads long enough, there was more length then I should have had, so the side chains were longer then I was looking for.  I also left too much space at the end of the long beaded picots.  I used some knitting stitch safety pins 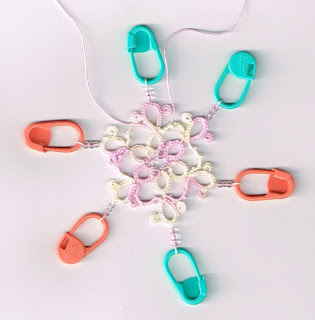 They are nice, have no loops at the end to catch thread like metal safety pins do, but because they are plastic, they are thicker.  There was enough space on the long picots to add the 4th bead, but I did not do so.
Fox's pattern is perfect, my execution was not.

The thread I used was a size 30 HDT picked up from ebay many years ago.  I do not have any artist info.  The name of the colorway is Sakura2.  It is a very pretty pale yellow and pink.  The beads are clear lined with pink, but most of them do not show any pink in the scan.

I have several other projects in progress
1. This is a rework of an antique pattern requested by another tatter.
I have done the original pattern twice,

This yellow is my first pass through the pattern, it worked out pretty well. I was able to re-write the pattern in modern notation, I did not find any mistakes, so that was good.
I then worked it the second time like this 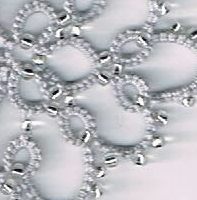 Silver beads on silver thread,  it is a start, but needs more thought to end up with what was requested.

2. I am also doing a test tat for another tatter

This one is fun and going quickly.

3. Several other doilies that I have posted about previously are still waiting for their final repeat or a round or two.  I really need to get them done,

4.  another set of 6 snowflakes to fulfill a commission.

5. I have some threads from Jess! on order, they have been shipped and I am looking forward to receiving them.  One of them in particular is destined for a large project that I have in mind, and I will detail that more once the thread has arrived.

We had another winter storm yesterday, and because it is March it was accompanied by rain/mist/drizzle.  There is ice on the roads and ground drifting, so there are snow drifts across the roads.  Made for a slow drive to Mass this morning. But Yeah!  the sun is out this afternoon, so maybe the roads will be cleared off before I have to leave for work tomorrow morning.