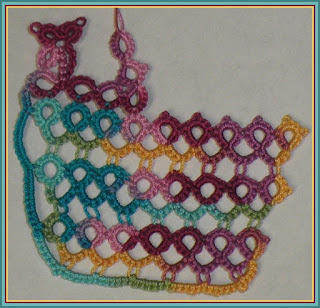 Here is my day 6 for Jane E's TIAS.
I still have no clue about this one, usually I can see something, but not this year, you are mysterious Jane.  The link to participate which you can do at any time, if you haven't started, but are intrigued, is here.       Jane posts small bits of the pattern every few days, so it is easy to do in a small amount of time. She also doesn't tell us what we are making, we have to guess, which is part of the fun. 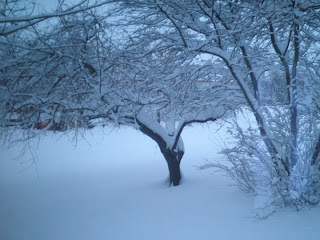 And I am including for your pleasure a picture of the 10 inches of snow we got last night. there was no wind so it piled up on the trees and roads, schools are 2 hours late, and roads are slick because we had freezing drizzle before the snow yesterday.


This picture is in our yard, that is an Apricot tree, and some Chokecherry bushes. 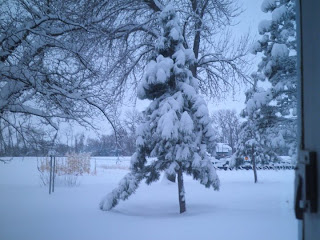 This pine tree is holding big puffy loads of the snow.

Well, have to get to work here at home so once the roads are clear, I can get to work.
Have a very good tatting day, stay safe and warm and have a good cup of tea. 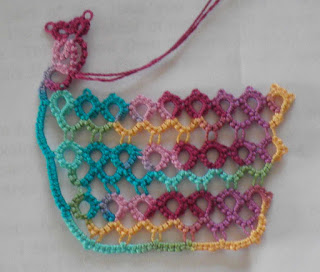 I have been using the intrepid version of directions, and also using Lark's head Picot Joins and Catherine Wheel Joins

I have been using Krystle's  LHPJ as this is varigated thread and I didn't want the color blips, but I couldn't figure out how to do that on the 2nd side of the split ring #25, so I have a color blip of teal in a raspberry ring.

Does anyone know the technique to do this?

Our priest has asked me to see if I can mend this vestment. 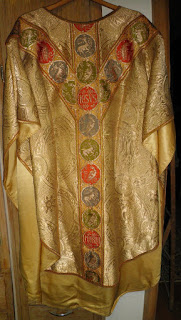 He received it second hand while he was in the seminary. He thinks it is 65yrs old or maybe more - older then Father by more then a couple decades.
He wore it for his first Mass and for special occasions since.

Here are the labels from  inside


I did some internet searching and found the Dr Oidtmann studios associated with stained glass, and the Hubert Gotzes Art Weavery is now a museum in Krefeld Germany.


There are several areas that need mending, or maybe re-weaving, which is beyond my expertise.


If anyone has any information about this vestment, or how to mend it both Father and I would be appreciative.

Taco John's breakfasts....
In a previous post I mentioned that both my husband and I won $5.00 Taco John's breakfast certificates by answering trivia questions on our local radio station at 6:40 in the mornings.
We were able to use them last week.  I had 2 small breakfast burritos, scrambled egg with either sausage or bacon accompanied by some potato oles and a bottle of orange juice.  Farmguy had a scrambled egg plate that started with a layer of potato oles, then scrambled eggs, some sausage or bacon (your choice) shredded cheese, tomatoes and peppers.  They were good, but not something we would like to eat every day,  there was more spice heat than we normally eat in for breakfast.

Sourdough stater....
I have now been using the Sourdough starter for several weeks.  I am not using it exclusively for all our bread but maybe every other loaf.
For storage, it is suggested that you use non-reactive materials, so I am using glass. 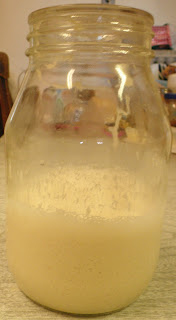 This is a large quart & a half jar that used to contain Kraft Miracle whip back in the days when they used glass jars, it fits a wide mouth canning lid.
The lid is an antique glass lid from back when they started to use 2 piece canning lids, this would have been used with a rubber sealing ring and the screw band would have probably been zinc, as I have some of them. 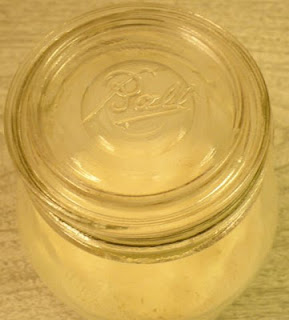 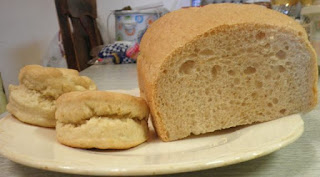 You can see that the biscuits have a nice break to them and the bread has a good crumb and texture. 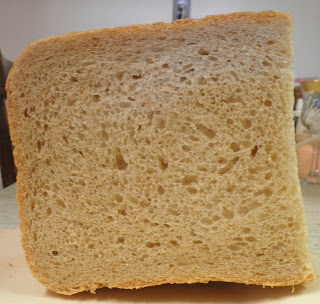 Another view of the bread

It isn't hard to deal with, just a bit different and you need to plan ahead a bit more.
I have made sourdough bread both by hand and in the bread machine, using the french bread setting on the machine.  It works pretty good.  The bread is moister, and doesn't dry out as easily as regular bread.

Long past time for bed at a quarter to 12 midnight, so will show my tatting in another post, as this is really long enough.  I have been tatting.  lots off snowflakes  I can now show and I am participating in the TIAS.

Have a good night, and maybe I will be able to post again tomorrow night.

P.S. by the way, our night time temps have been in the -20 F s  Yesterday's high was -5F and today we got up to a balmy 5 above.  Yeah for North Dakota in January.


on another note, life has been a bit messy the last couple weeks.

I will get the wrapping up entries done on the last couple of posts and be on to new things next week.

sourdough update has been delayed a few days.
Too many other things get in the way.