about 4 or 5 months, I have had a project that I have worked on off and on, in the car, at meetings, visiting at friends and other times when I had a few minutes.

I used size 20 thread in a colorway from Manuela that has long since lost it's color number tag.

it is a present for a friend who asked for a pouch to hold as Rosary in her purse.  it became a more involved project then I had anticipated. 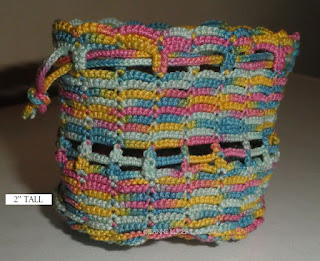 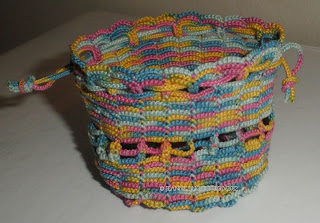 it is very solid as I didn't want the arms of the Cross to poke out and get caught on things in her purse. 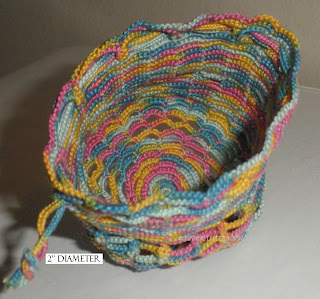 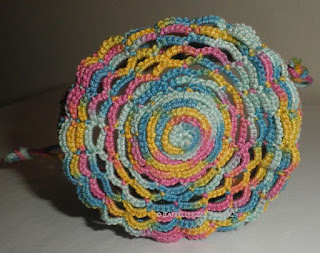 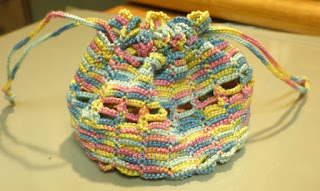 Hope she likes it.

I have started another long term project, that involves several versions of edging.  I need to finish the hanky I started last year, and I started a doily yesterday during a meeting. I have finished about 1/4 of it.

Sunday is Palm Sunday, and it is the day of our annual Parish dinner.  I am in charge of it this year.  so don't know how much tatting will get done this weekend.
and Sunday is also International Tatting Day.  so I will try my best to do some tatting on that day.

in the "Good Old Days"

many years ago not too long after we moved into this farm house, I discovered a book tucked in to the basement ceiling.  it isn't in the best of shape, as I don't know how long it had been there before i found it, and a wood stove had been, and still was being, used in the basement.

it was very old, that much I know as for some reason I was sure it was from the 1800's.  I loaned it to a museum, and then later got it back, but put it away and forgot where.  it was sealed in a plastic bag, which of course also wasn't the best for it. The other day I found it. so thought that on occasion i will share some of the ancient wisdom to be found in the book. 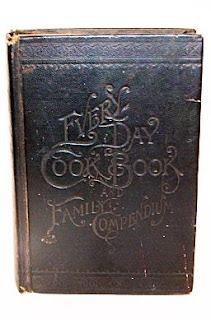 The cover of mine is so worn, that you can barely make out that there is some letters on it.  the above picture is from this webpage http://www.vintagecookbook.com/tcb0002.html   So now I know that the book was published in 1886. I have discovered 2 different publisher versions, mine from Chicago and one from San Francisco,

today I will share a several of the items from the book.


there are no directions on size of pan or what temp or how long to bake it.

To Make Small Sponge-cakes
The weight of five eggs in flour, the weight of eight in pounded loaf sugar; flavoring to taste.  Let the flour be perfectly dry, and the sugar well pounded and sifted.  Separate the whites from the yolks of the eggs, and beat the  latter up with the sugar; then whisk the whites until they become rather stiff, and mix them with the yolks, but do not stir them more than is just necessary to mingle the ingredients well together.  Dredge in the flour by degrees, add the flavoring; butter the tins well, pour in the batter, sift a little sugar over the cakes, and bake them in rather a quick oven, but do not allow them to take too much color, as they should be rather pale.  Remove them from the tins before they get cold, and turn them on their faces, where let them remain until quite cold, when store them away in a closed tin canister or wide-mouthed glass bottle.
what temp is a " rather quick oven"?

and since we are coming into warm weather, here is their suggestion:

To Keep Off Mosquitoes
Rub exposed parts with kerosene.  The odor is not noticed after a few minutes, and children especially are much relieved by its use.

On another blog I read, Little Grey Bungalow Shay posted a recipe for soap.  I thought I would post a soap recipe also.

An Excellent Hard Soap
Pour Twelve quarts soft boiling water on two and one half pounds of unslacked lime: dissolve five pounds sal soda in twelve quarts soft hot water; then mix and let them remain from twelve to twenty-four hours.  Pour off all the clear fluid, being careful not to allow any of the sediment to run off;  boil three and one half pounds clean grease and three or four ounces of rosin in the above lye till the grease disappears; pour into a box and let it stand a day to stiffen and then cut in bars.  It is as well to put the lime in all the water and then add the soda.  After pouring off the fluid, add two or three gallons of water and let it stand with the lime and soda dregs a day or two.  This makes an excellent washing fluid to boil or soak the clothes in, with one pint in a boiler of water.

Hope your weekend has been a good one.  on to other things.
Posted by Ladytats at 5:05 PM 9 comments:

Email ThisBlogThis!Share to TwitterShare to FacebookShare to Pinterest
Labels: 1886 cookbook

John posted a picture of a shuttle he received from an aunt. He stated that he wasn't sure about the hook on the end.
I have a shuttle like his,  here is a picture of mine. 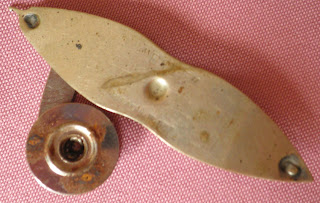 you can't read the words in this picture, but it does say "BOYE" above the center divot and  PAT April 10, 1917 below it.

here is a closer look at the hook 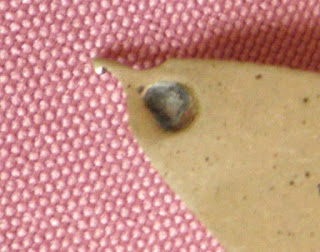 John, hope this helps you.

I had intended to post this earlier this afternoon, but farmguy came in and said he needed my help with a project.  I thought maybe an hour or 2, but no, we didn't get in the house until after 9 this evening.  we have finally finished supper and it is 10:20 pm.  I am going to get this posted and head for bed.

I am several days behind in reading my blog list. I have been doing re-cert classes for what used to be called First Responder.  the National EMS registry has changed the name to Emergency Medical Responder (EMR) and changed some of the things we can do.  They took away some of the things we used to be able to do, and gave us some new stuff.  So, I have passed the written test, and taken and passed 3 of the 5 practical tests, CPR & AED, applying a non-rebreather mask, using suction and using a Bag Valve Mask.  next thursday I will take and hopefully pass the Medical and Trauma assessments.  Good thoughts sent my way would be appreciated. I am not a member of any of the local ambulance squads, I was several years ago, but decided that a 15 mile trip at high speeds to get to the ambulance garage to go on a call just wasn't safe.  instead I am a member of our tiny local fire department only 3 miles away as the crow flies.  much easier to get there. I don't fight fires, I am responsible for the health and safety of the fire fighters, and I am expected to respond any time the county dispatch sends out a call for a medical or trauma in the fire dept area as the nearest ambulance service is at least 20 minutes away.
Posted by Ladytats at 10:29 PM 7 comments:

Email ThisBlogThis!Share to TwitterShare to FacebookShare to Pinterest
Labels: shuttle

one of the things I have tatted lately

I finished this last evening but didn't get a chance to post it until tonight.
This is done in Flora size 20.
The nun I made this for said her favorite color was emerald green.  this is the closest that I could get to that. 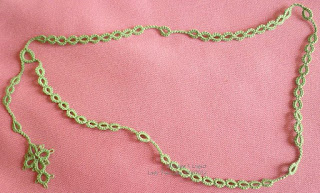 The weather this weekend has been gorgeous for this time of hear. 60 yesterday and today not quite so warm, but still warm enough.  the snow has been melting.  not too long and field work will start again. spring is around the corner, and summer can't be far behind.

I have been test tatting several patterns for another tatter, so can't show that work.

A quick question.
I know many of the ways to stiffen tatting.
starch
glue
sugar
epsom salts

in the post below about my angel, I mentioned that  I would have to make different wings because of the weight of the beads.

I was showing my work to some friends of ours when they were over on sunday, and the gentleman suggested that I get some lacquer and use that to stiffen both the bell and the wings.
he stated that instead of dulling the beads as the above list of stiffeners would do, it would shine the tatting as well.

This would definitely stiffen the work.

has anyone tried this?
Posted by Ladytats at 10:49 AM 9 comments:

Email ThisBlogThis!Share to TwitterShare to FacebookShare to Pinterest
Labels: laquer

i guess I must be grouchy tonight

*rant alert*
anyone else notice that since blogger has set up reply options for embedded comments, and started their double word verification that those blogs that have their comments on a separate page have lost the option to click that you want subsequent comments sent to your email?
I have to remember to go back and check to see what other comments have been left if I asked a question to the blog owner.

I wish they would let you know they are making these changes and set out the options you have before they make these big changes.
*rant over*
Posted by Ladytats at 10:57 PM 4 comments: