not tatting but Socks!

As the title says, there is no tatting in this post.

Some of you may recall a few months ago I posted that I was in search of a Sock Knitting Machine.
I have not found one to purchase yet, it is still on my wish list.  However, I have had a chance to use one.

A few weeks back I heard from a friend of mine (MB) who knew someone (JE) with a Sock Machine who wanted some help with her tatting.  I was willing to help and JE was willing to bring her Sock machine and let me play a bit.
We got together and spent an afternoon swapping knowledge.

She helped me learn to do some straight knitting, make a heel and a picot edge turned hem that became a set up basket ~ one of the ways to cast on when starting a project.

A couple weeks later another gal (PB) I know that shares a booth with me at WMSTR over Labor day weekend, agreed to show me her Sock Machine.

She has several and was showing me the differences in them.  Near the end of my visit she asked if I would like to borrow her machine from the early 1920's and work with it for a bit.  Well, I nearly jumped out of the chair I was sitting in YES!! 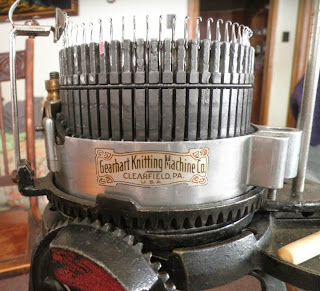 So, instead of tatting, which I need to get at quickly, I have been sloughing off and some one is patiently, or maybe not so patiently waiting for the rest of the snowflakes I owe her, I have been spending my spare moments playing with this awesome machine.

I didn't take any pictures of my work on the machine, but I have a few more pictures of things I have been doing. 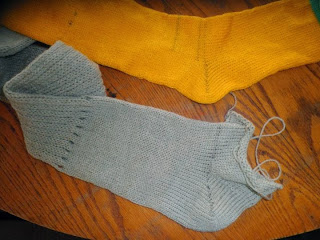 The yellow is the first heel I made and you saw it above, the grey is from the cone of yarn that PB sent home with me and her machine. This heel I did by myself.  Not as good as the other, but not bad.

A section of mock rib.  I don't have the ribber attachment for the Sock Machine, so thought I would see if I could do some mock ribbing.  Not too bad.  Need to do more playing with tension.

This is what I accomplished this weekend.  Actually I did have another one up to about the middle of the heel and then didn't pay close attention to moving the weights to keep the stitches down on the needles where they needed to be and made a mess of things so took that one off and started again.

This sock took me a couple of hours all told.  I did it in between laundry, housecleaning and attending a wedding reception for a niece last night.

I finished it today after Mass

Not too shabby if I say so myself.  He he.
There were a few dropped stitches during the whole process, but I have "mastered" the technique for fixing dropped stitches.  The heel turned out pretty good.  The toe on the other hand, while you can't really see them in these pictures, I didn't do as well, and there are some holes along the mid line.  But I Kitchenered the toe seam and that looks pretty good. 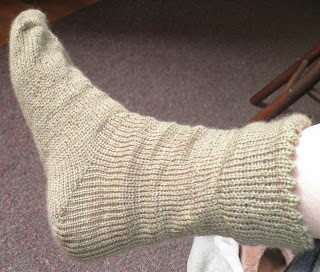 Here is the sock on, it actually fits pretty good.  surprisingly, as I was simply doing rows between the hem and heel and between the heel and toe for practice.

I am sure that I will not be able to do another to match.

But I am rather "chuffed", as a well known tatter UK would say, in what I have accomplished.