Oh, what a joy it was to get home tonight from work and discover such wonderful presents that came in the mail.

since I had not had a very great day at work,  there was a bad snow storm so they closed schools and we all rushed around trying to get out of work early and off the roads before dark, and I got stuck in a snow drift a mile from home.  it was really nice to find good things waiting for me.  I had to call "FarmGuy" to come get me unstuck from the snow drift partly because I hadn't put a good shovel in the car and partly because I was stuck enough to need help.  He got stuck again after getting the car out of the drift, so I didn't feel quite so bad, but I was cold and my jeans were frozen from the snow.

and here is what I found in the mail 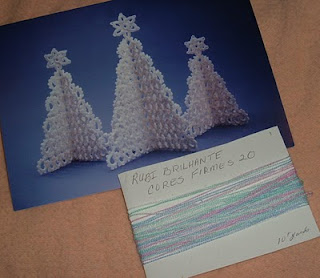 From Lynn Demsky in Michigan, I received a very nice Tatting Christmas card with very pretty pastel variegated thread labeled Rubi Brilhante Cores Firmes 20. ( I did receive Lynn's thead about a week ago, but wanted to wait to post until all the threads came.) 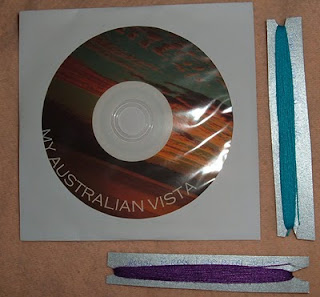 From Roberta Lawson in Australia, I received  2 new threads I had never heard of  Cap putri Duying in Royale Purple and Cap Putri Duying Benang Sulam istmelia in Teal. She also sent a CD of Australia,  I have not yet had a chance to play it, so am looking forward to a few minutes of quiet time. 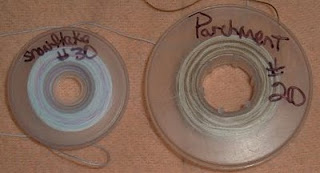 Sue Anna Scribner from Illinois surprised me with 2 of Marilee Rocklee's HDT  Parchment  Size 20 and Snowflake size 30 and both were wound on what I think are called EZ bobs.  I think I am going to have to take another look at these thread holders.  they look very handy.  She also sent a nice card with pictures of her tatted motifs and 2 snowflake patterns, Jon Yosoff's Double -Decker star and Flurry Snowflake by Jane Eborall 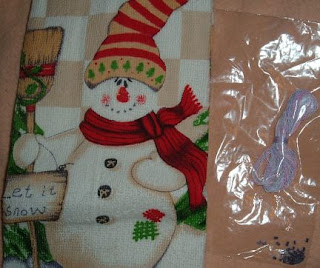 Jane Armstrong from North Carolina, sent a pretty variegated thread in pinks and blues and she included some beads that look just right with the thread.  she also sent a very pretty hand towel with a snowman on it holding a sign stating "Let it Snow",  can I blame her for the snow storm today? Tee Hee,    Jane wrote a note on the outside of the package stating that she had forgotten to include the card, so I don't know what type of thread she sent, so will have to wait to find out. 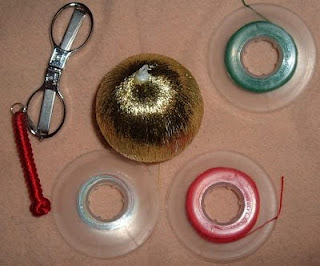 and last, but most definitely not least, from Lily Morales also out in California,  i received a big bunch of fun. 3 of the EZ Bobs, and they contained the following threads, a Christmas colors variegated Flora in size 50, and red and green Cebelia in size 10.  Along with these threads she sent a pretty Gold Christmas ornament, of the kind you can attach tatting on and a folding scissors with a very nice knotted fob that I am sure she made, as I have checked out her blog where she shows and talks about knots.
I have been doing some tatting, but haven't posted any, so will have to get at that sooner or later.
Posted by Ladytats at 9:57 PM 1 comment:

this is my husband and I and our children and grandchildren at this years Thanksgiving.
We had a lot of good food and a lot of good fun and talk.  I thank God for all of us, we get along, granted there are occasional  times we raise our voices, but no one holds grudges, and we have great sons in law. 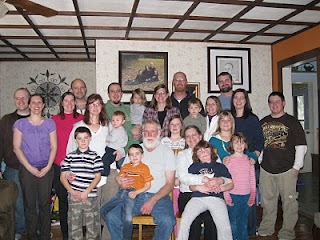 no names to protect the innocent.
Posted by Ladytats at 11:19 PM No comments:

Email ThisBlogThis!Share to TwitterShare to FacebookShare to Pinterest
Labels: family

in June I will be come a grandmother for the 10th time!!