I have fixed another Vestment for Father A.  This time it is a stole.  It is part of a set that was given to him by the family of a Priest friend Fr D.  They went to seminary together, but Fr D died of cancer a short atime after he was ordained.  For this reason it was a very special vestment set for Fr A. 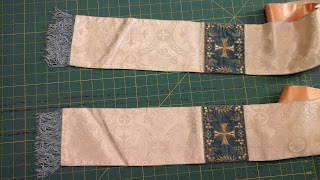 He was wearing the Chasible and Stole a yr or so ago during a snow storm.  Some how the stole was dropped in the snow as he got in his car and no one noticed.  It was at least a few days before it was found on the other side of the street in a snowbank that had been pushed up by a skid steer.  Needless to say, it was not in the best of shape. 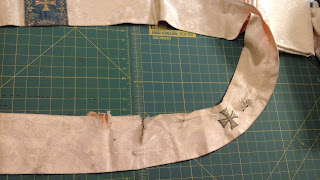 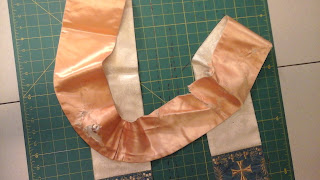 Fr A wanted to preserve as much of the original stole as possible, or it would have been easier to just make a new one.
I spent quit some time looking for matching material and contacted a gal who does Vestment and Liturgical sewing for a living. https://www.ecclesiasticalsewing.com

I found some that matched pretty well.

I have to say that cutting into vestments is always a bit scary for me, but I removed only as much as I needed to and replaced it with new.  I was able to put the seam for the white under the blue velvet band and the seams for the gold lining don't show when it is being worn.
Below are the after pictures. The original white is to the right of the bands and the fringe is original. If you look really closely, you will be able to see that the new fabric is not the same pattern as the original. It is close and with the band between, it isn't too noticable. 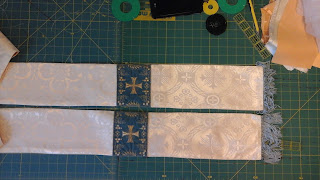 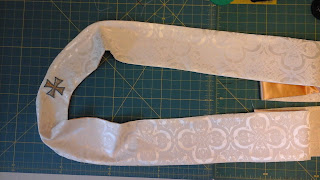 I was able to save the cross from the original and add it to the remake. 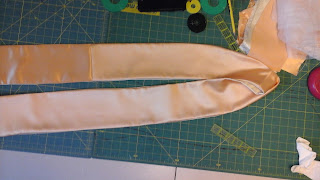 Here you can see that I was able to save more of the lining on  side than the other. 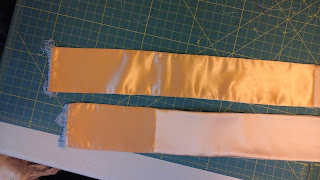 The newer lining is a polyester satin and while in person it is close in color and shine, in the camera flash, it looks much different.

Fr A is pleased so that is good.  He wore it for Mass today.
I am in the process of ordering some linen to make the "neck protector" that is sometimes applied to the neck edge of a stole that can be easily removed for laundering and keeps the stole cleaner.  I will tat a small lace edgeing for it.