on Tuesday, we went back to Fort Worth to see the cattle drive at the Stockyards and the Cowboy hall of fame.

it was a rainy day.  The cowboys & Girls were wearing their slickers 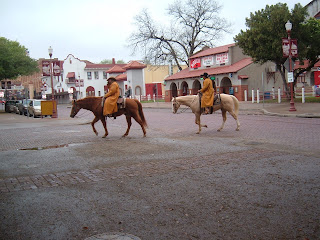 Here is what a look at a cattle drive with Long Horns,  if you have read any westerns or heard about Long Horn cattle, notice the length of the horns on these. 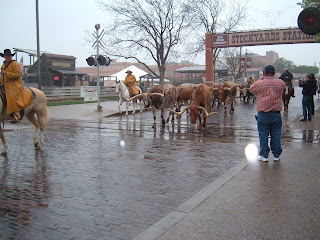 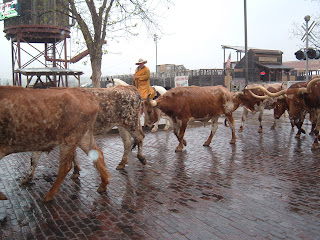 you can see in the picture above, that the streets in the stockyard area of Fort Worth are brick.

we ate at a Riscky's BBQ,  very good food, where they had the Cowboy Commandments posted 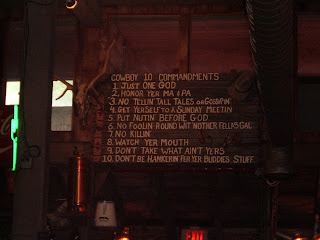 Wednesday and Thursday we drove home.

The End
Posted by Ladytats at 1:00 PM No comments:

so, on Tuesday, we decided to make a trip to a little town about an hours drive, Glen Rose.  But first before we left town, I had to take a picture of this really cool house right in the middle of town 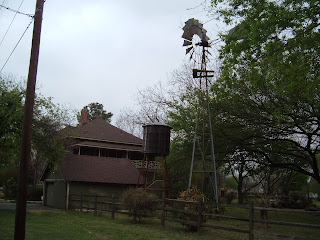 Yup, that is a windmill and water tower in their back yard.
There are a lot of really interesting houses in Cleburne Texas.
we made our first stop at the Dinosaur Park, where there is a walking trail with a lot of different kinds of Dinosaurs and plaques explaining about each kind.  I filled the memory card in my camera, and the replacement was back at my daughter's so I don't have pictures of all of the kinds of Dinosaurs but will post a few here. 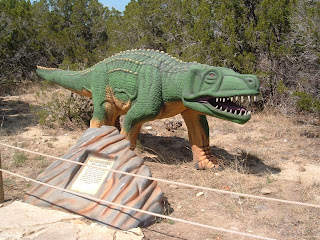 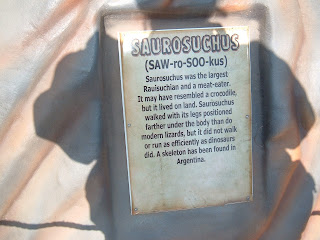 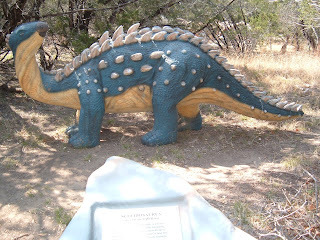 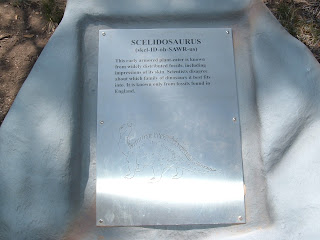 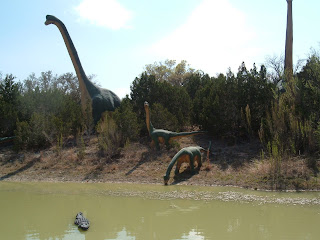 A water scene that includes several varieties of dinosaurs and there are also Koi fish in the water.
after were were finished with the Dinosaurs we had enough time left to go to the Fossil Rim Wildlife park.
this is safari park where you can drive around and look at the animals in a more natural setting and even get to feed them.

we were greeted by an Ostrich 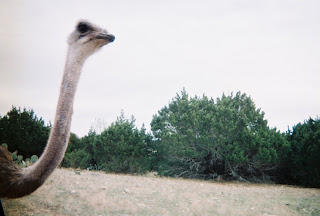 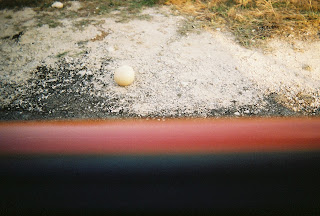 toward the end of the trip which took about 2 hours, we saw this egg along side the road. 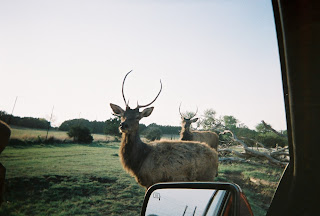 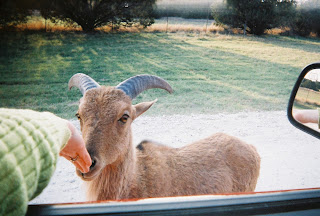 there were a lot of different types of deer and antelope from several different continents. 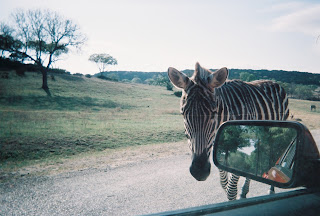 while we were told we could feed the animals, we were warned that we should not feed the Zebras out of our hands as they can bite.  Barb has pictures on her camera of the Zebra's that wanted to get their heads in the car to check for food, and made a mess of the windows.


the really neatest part of the trip was the Giraffes 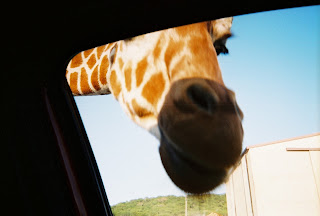 After I stopped feeding him/her on my side, he/she went around to the other side and both Barb and Sarah had a chance to feed him/her


it was a very good day.  God made so many wonderful animals and gave us the chance to interact with them.  What a blessing.

Come back tomorrow for the last chapter
Posted by Ladytats at 4:52 PM 1 comment:

On Sunday we went into Fort Worth. and visited the Cowgirl Museum. 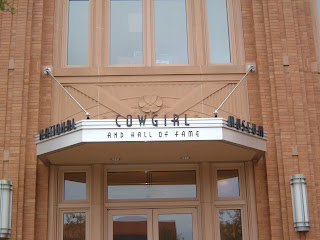 One of the exhibits was called the Apron Memoirs.  They exhibited many different kinds of aprons and had many written memories of people and  aprons 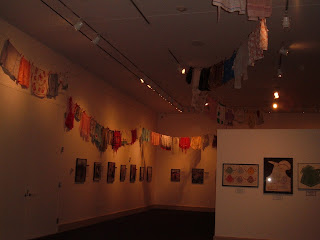 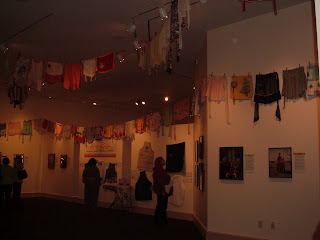 I should have used my "night setting" on my camera, it would have made these pictures easier to see.

and on one of the written memories, they included a recipe for Rhubarb Pie.

I am going to have to give it a try.
this was the only exhibit in the Cowgirl Museum where we could take pictures, they were prohibited in the rest of the building.  There was a lot of really neat information about Cowgirls all in rodeos and movies.
I did take a couple of pictures outside. 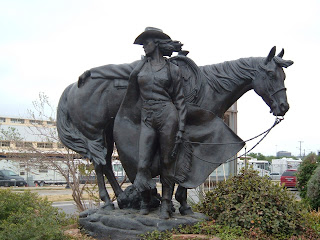 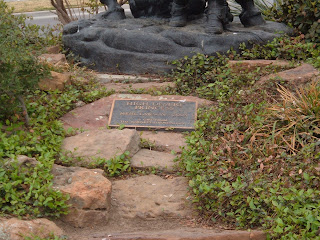 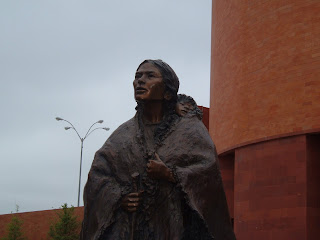 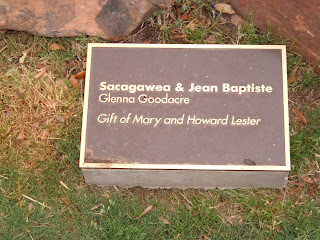 it goes without saying there was a lot of really good food to eat.

Stay tuned tomorrow for the next chapter
Posted by Ladytats at 6:00 PM 1 comment:

I am going to start with a bit now and then of my trip.

If you have read my previous posts, you know that Barb and my trip was held up a day due to a rain/ice/snow storm.

We finally got on the road thursday morning. we had some icky roads for the first 100 miles or so, but after that it got better.

we made pretty good time and stayed the night in Salina KS.
on the second day ~ friday ~ as we got near the southern end of Oklahoma, we encountered the Arbuckle Mountains.  for those you read westerns, you might recall Arbuckle coffee?  don't know if there is a connection or not, but here is a picture of the road going through the mountains. 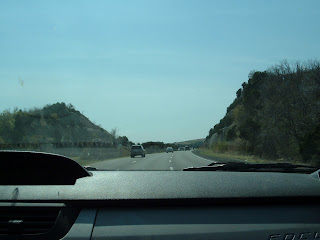 we got to our destination before supper.

Saturday we went to downtown Cleburne for a bit of shopping and sight seeing.
there was a mural on the side of a building with some interesting information about the town.  please note that the wall this is painted on is not brick, it is flat concrete,  the bricks have been painted on the wall 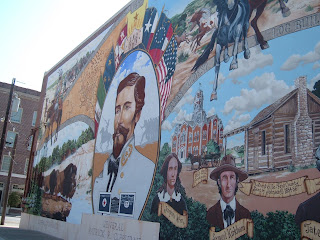 there was another full wall to the right.
In the afternoon, we went out to a park where they had a celebration for the namesake of the town, Gen Pat Cleburne.  Who never actually lived in the town, but several of the soldiers who served under him founded the town.  anyway, we got to see some civil war reinactment and listen to a gentleman in a Scots kilt and  speaking with a brogue tell stories.  and did some buying of stuff. 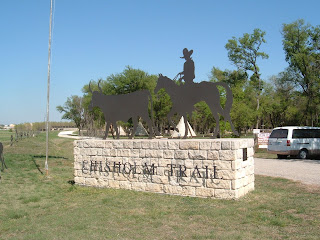 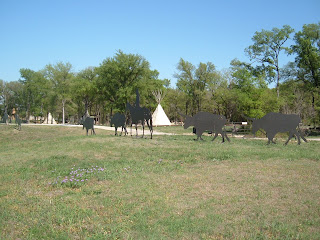 there was about 1/4 mile of these cow and cowboy cutouts.
we also made it to Mass.
all in all a really nice day.

Stay tuned tomorrow for the next chapter.

Today is INTERNATIONAL TATTING DAY.
While tatters the world over, tat every day or as often as they can, we use this day to celebrate our art.
The rules for the day are as follows.
1. Tat something for yourself
2. Eat something chocolate, carefully so you don't get it on your tatting
3. If possible, Tat  in public, so others can see you, be intrigued, and ask to learn.

there is conflicting information depending on where on the web you check as to the length of time this day of observance has been in existence.

On another note,
it is the first day of April.  the temperature is 36 F and so since farmguy doesn't like his clothes dried in the dryer,  TA DA
have a great day
Posted by Ladytats at 12:17 PM 4 comments: