A week ago, we had trouble one morning with the phone and internet.  Called the local phone company which is a rural Co-op.  They sent a repair man out later that morning to see what he could find.  He discovered a gopher mound near/over where the cable runs underground between the road and the house.  Deducing that the gopher sharpened his teeth on the phone line, he decided we needed a new one.

The local phone Co-op is in the process of installing fiber optic cable here in our area of North Dakota, but in the way of these things, one company will dig in the underground cables, one company will have the contract to hook up the houses, and the local repair person will finish the installation.  All this takes time.  The underground stuff has been done, and in fact was done last fall, they haven't come around and hooked up the wires into the new box they installed on the side of the house, and the interior wiring hasn't been done yet either.

So I thought I would show you how we do things out here on the farm  when you need an interim solution.


And there you have it,  the phone company doesn't want to take the time and expense to dig in a new phone cable when they would be replacing it soon anyway.  So far we have had good phone and internet connection so I have no complaints, but I get tickled anytime I think of it. To me this is hilarious.

I have been tatting, but it is testing someones pattern so can't show you.  I have also been working on the leaves for my Tishband. and I have a pattern swirling in my head I just have to get some time to deal with.  Also I still want to tat the dragons, and I have 6 more doilies to get done before Christmas.  I really need more tatting time.

Hope you have had lots of time to tat.

THANK YOU VETERANS FOR OUR FREEDOM

I love this song. I enjoy singing it and have requested the radio station play it.

May all have a Happy Memorial Day.

I wish there was no need for one, but unfortunately we do.
Posted by Ladytats at 11:34 AM 3 comments:

It's late, but I promised tatting so here goes.

My friend B and I traveled about 9 hours from North Dakota to Manitowoc Wisconsin.  Manitowoc is on the east edge of WI, right on Lake Michigan.

We were going to visit B's mom A.  We took turns driving, and while B drove, I tatted. 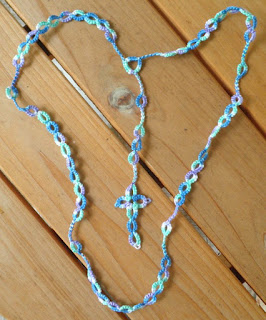 Here is a Rosary I tatted on the trip.  It was for A who is 84, so I used size 10 thread.  It is a hand dyed thread I bought on ebay several years ago, and do not know the colorway or the base thread, but it is soft.

2. A's sister, D, also lives in the same complex.  She is 90 which shocked me, as I was sure she was still in her 70's.  She flower gardens along the outside her apartment, plants tomatoes in the designated vegetable areas, and because she had more plants started then room for, dug up another area down the slope from her patio near a wooded area.  She also volunteers at the local food pantry every friday morning, leads the Rosary every evening at 7, sews and mends for people, and in her spare time, sets puzzles and does plastic canvas needle craft.

The plant below is one she has had for some time, but she said it made her mad as it wouldn't bloom, and was going to throw it out, so I took it. 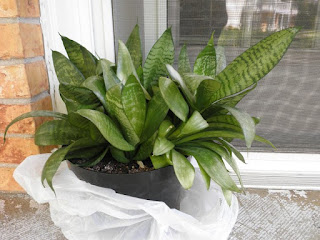 In the pot along with the plant was one of those clear stakes that florist use to hold a card. So, to pay her for being such a sweet lady, I tatted Sherry Pences' Hope Butterfly and attached it to the stake. D was pleased. 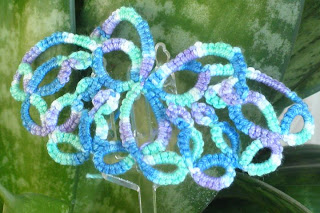 This was tatted using the same thread as the Rosary.

3. I finished my Tischband flowers

They are tatted in Marilee Rockley's Rhubarb Pie in size 40. The quarter is to show size. Now I have to decide on the leaf color and get them finished.

4. I had some down time and in my previous post showed some thread from Jess at Tat-ilicous.
Here is what I tatted with the Camo-licious 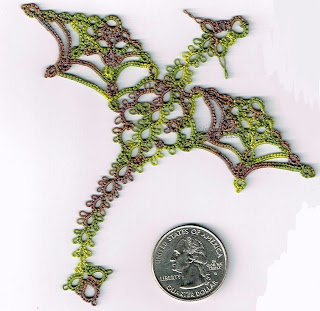 Her name is Huntress.  She is a Forest Guardian.  The thread is a size 40.  Here is a scan of both Huntress and Dawn Flyer, the dragon I tatted last fall. 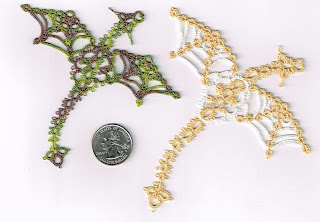 Dawn Flyer is tatted in size 20.
I have almost finished the 4 book series titled Inheritance Cycle, by Christopher Paolini.  In those books there are 5 dragons,  Saphira who is blue, Thorn who is red, Glaedr who is golden, Shruikan who is black  and one dragon egg that has yet to hatch, so I don't know what color that one will be.  I have a yen to tat dragons in those colors.

5. Once I finished these I started a doily with the second colorway from Jess, Peacock in size 40. 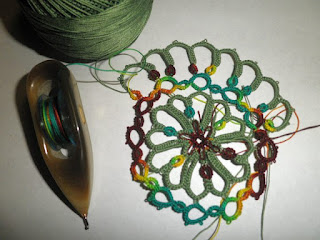 I paired it a ball of DMC in size 40 color # 320 Pistachio Green - Med. The doily is Linda Davies Star Attraction.

And I will leave you with several other pictures I took on my trip.

Along the road in the middle of the state there is a resident with a sense of humor.  Do any of you remember the TV show Petty Coat Junction? 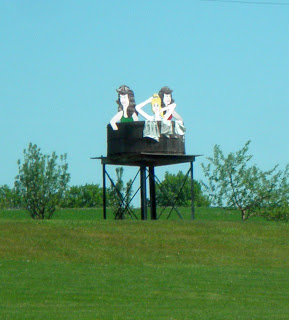 We actually turned around and went back a couple miles, just to get this picture.

I hope all of you who qualify had a great Mother's day, I was contacted by all my children so that made it a very good day for me.

Have a great day tomorrow.
now it is time for bed.

Got back from my trip at 9:30 last night.
give me a couple days to catch up and I will post all the tatting I got done.

When I am at work, farmguy gets the mail. it is a 1/4 mile trip to the mailbox.  no biggy, but still it can be a pain if the weather doesn't cooperate.

When I got home today there was a package on the couch waiting for me.
I know what it was, 'cuz I ordered it, he he, but that doesn't begin to come close to what was in the package. 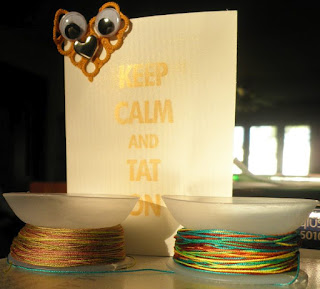 Last week, Jess of Tat-ilicious, offered a coupon deal on her threads through Etsy.com.  I liked the look of many  of her colorways so took advantage of her coupon and ordered some size 40 threads. Here is her Peacock and Camo-licious wound on Bob-eez.
And look at the cute googly-eyed heart that came with the threads.  what  cutie. Jess's tatting in the heart is very precise.  Thanks for the heart Jess.

Thanks Jess,  These are in my Tatting bag.  I am headed out Wednesday for a 6 day trip. and there should be lots of time to tat. The Camo is slated for a project by itself, the Peacock will be paired with some size 40 DMC as it is destined for a doily.

My Tatting bag is by DS9Designs I really like it, very roomy and lots of pockets.

I am also taking Rhubarb Pie so I can get the other 3 flowers for the Tischband done, some size 10 thread (or should I say cable) to make a rosary for an elderly lady, some size 20 light pastel Manuela for an ongoing project, and in my purse is my Beauty Spot hanky edging in Krystle's Wisteria Lane.

See you next week after I get back.
Posted by Ladytats at 11:16 PM 6 comments: